Members of Southbank Gamelan Players are excited to be involved in this project.

PULSE, commissioned by the Royal Philharmonic Society, brings together British/Bulgarian composer Dobrinka Tabakova and Scottish film-maker Ruth Paxton to create a new score and film for the PRS for Music Foundation’s New Music Biennial in 2014, one of 20 new commissions selected from over 130 proposals.

END_OF_DOCUMENT_TOKEN_TO_BE_REPLACED

Hear the wonderfully rich and resonant tones of the Javanese gamelan – an orchestra of almost a hundred bronze gongs and metallophones from Indonesia which, in the wonderful acoustic of King’s College Chapel, is sure to sound mesmerising.

This is a diverse programme that celebrates a rich, living tradition: classical music from the royal courts of Java is heard alongside 20th Century Javanese compositions and the world première of Cathedral Grove for bass flute and gamelan, composed by Cambridge-based composer and master gamelan musician, Robert Campion.

For this very special concert the Cambridge Gamelan Group will be joined by members of Southbank Gamelan Players, Ensemble-in-Residence at London’s Southbank Centre.

Especially created for the Church Stretton Arts Festival, Holding Up the Sky will be a unique opportunity to hear the stories and sounds of South East Asia.

Uniquely, for this performance Cassandra Wye will be joined by members of the Southbank Gamelan Players, who will create the musical backdrop for these real and imagined worlds.  They will play a selection from a repertoire that spans the thousand years of Gamelan music – from the ceremonial sounds of the courts of ancient Kings to the music created by contemporary composers for the Gamelan.
Don’t miss this magical collaboration, it’s suitable for all ages: adults and children are welcome!

END_OF_DOCUMENT_TOKEN_TO_BE_REPLACED

South Bank Gamelan Players are proud to support ::Nonclassical‘s biggest ever event at the Scala. Southbank Gamelan Players will present a 30min set of contrasting pieces comprising refined  traditional music from the Royal Courts of Java, exuberant music from mountain  villages plus a contemporary work written exlusively for the gamelan by a London based composer.

The Panji Story: A Javanese Tale

The Panji story is native to Indonesia, specifically to East Java. Unlike adaptations from India such as the Ramayana and the Mahabharata that play such an important role in the Javanese performing arts, the Panji story is originally a Javanese tale, a story of our own ancestors. But the story has also long been known in several countries of Southeast Asia and even further abroad in Asia. In Thailand, it is called Inao. As such, it is an example of Indonesian national culture that has spread beyond the archipelago.

END_OF_DOCUMENT_TOKEN_TO_BE_REPLACED

A weekend of Indonesian music, dance and puppetry 6-7 July 2013 Celebrate 25 years of gamelan (Indonesian percussion orchestra) at Southbank Centre. A packed weekend of free and ticketed events showcases traditional and new music for gamelan with dance, puppetry and electronics. Join us as we shine a spotlight on the international gamelan community.

Free events From 10.30am each day, 30 gamelan groups from across the UK and Ireland, and visiting artists from Indonesia, give free performances indoors and out. From the Ramayana on stilts to a post-concert chill-out with gamelan and electronics, discover the creativity of the international gamelan community. View timetable

A selection of pieces from the concert of 8 June will be broadcast on RAI 3 in the autumn.

Recently tutors from the Southbank Gamelan Players spent time with members of the Arsenal football squad as part of the team’s preparations for the upcoming Asia tour. Tutors John Pawson and Manuel Jimenez shared information on collection of instruments and gave a background to their historical and cultural significance in Javanese culture.

The results have been made into a small promotional clip for the team. If you listen carefully there is in fact a relationship between the notes used in the gamelan and the football chant which fades in at the end. Enjoy. 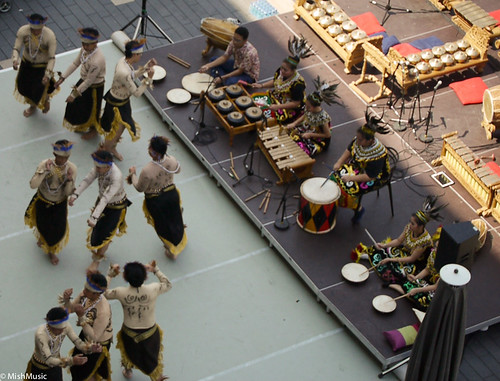